Black, Asian and minority ethnic (BAME) people are more likely to die from Covid-19, a government review has confirmed.

The Public Health England (PHE) report revealed Britons of Bangladeshi ethnicity had around twice the risk of white Brits of dying with the coronavirus.

And it showed black people, as well as those of Chinese, Indian, Pakistani, other Asian, or Caribbean backgrounds, had between a 10 and 50 per cent higher risk of death. The analysis did not take into account higher rates of long-term health conditions among these people, which experts say probably account for some of the differences.

Evidence compiled in the report also revealed that age is the single biggest risk factor that determines how likely people are to die with the virus - those over the age of 80 are 70 times more likely to be killed than under-40s.

And health conditions which appeared often on people's death certificates were heart disease, diabetes - understood to be type 2 diabetes, high blood pressure and dementia. More than one in five victims had diabetes, the data showed, which was a significantly higher rate than in people who died of other causes.

Poorer, more deprived people faced a higher risk of dying and men working in lower-paid jobs - such as security guards, bus drivers and construction workers - also had worse chances of survival if they contracted the virus.

Health chiefs launched a probe to investigate the disproportionate impact of Covid-19 on BAME Brits in April, prompted by a wave of evidence that showed white people were less likely to die from the disease.

He was pushed to deny that the release of the report - which was supposed to happen in May - had not been delayed because of political tensions in the wake of the death of American man George Floyd. He said in the House of Commons: 'We've published it and brought it to the House at the earliest possible opportunity.'

Mr Hancock admitted that the report has 'exposed huge disparities in the health of our nation' and his counterpart in the Labour Party, Shadow Health Secretary Jonathan Ashworth, noted: 'Covid thrives on inequalities'.

Doctors still don't know exactly what is increasing non-white people's risk of death, but PHE's report adds to a growing body of evidence proving the link exists. One paper presented to government advisers in SAGE suggested that higher-than-average rates of type 2 diabetes among black and south Asian people may be to blame - the condition is known to increase risk of Covid-19 death.

And another study done by King's College Hospital in London found that BAME coronavirus patients there were, on average, 11 years younger than the white patients - 63 compared to 74.

PHE's report came under fire for not answering these questions and for failing to bring forward any recommendations that the Government or public could act on to reduce the risk for BAME people.

Labour's Shadow Equalities Minister, Marsha de Cordova, said: 'Having the information is a start – but now is the time for action.

The report has been welcomed but also sparked outrage because it does not explain why BAME people are at a higher risk, nor propose anything that can be done about it.

Marsha de Cordova MP, Labour’s Shadow Women and Equalities Secretary, said: 'This review confirms what we already knew - that racial and health inequalities amplify the risks of Covid-19. Those in the poorest households and people of colour are disproportionately impacted.

'But when it comes to the question of how we reduce these disparities, it is notably silent. It presents no recommendations. Having the information is a start – but now is the time for action.

'The Government must not wait any longer to mitigate the risks faced by these communities and must act immediately to protect BAME people so that no more lives are lost.'

Sally Warren, director of policy at The King’s Fund health think-tank, said: 'We’ve known for many years that these groups typically have worse health outcomes, but there has been disappointingly little effort over the last decade to address inequalities and improve people’s health.

'The scandal is not that the virus has disproportionately affected certain groups, but that it has taken a global pandemic to shine a light on deeply-entrenched health inequalities.'

Facing questions in Parliament today about why the release of the report had been pushed back, Matt Hancock denied it was because of increased sensitivity about racism in the light of protests and riots in the US.

Crowds gathered in London, Manchester and Cardiff over the weekend to demonstrate against institutional racism, as widespread protests continue in the US after a white policeman killed an unarmed black man, George Floyd, by kneeling on his neck for nine minutes.

Conservative MP for East Surrey, Clair Coutinho, asked whether this had factored into a decision not to release the report on time. Mr Hancock said: 'I can absolutely confirm that [it hasn't].'

The Health Secretary added: 'When I asked PHE to undertake this piece of work I asked them to produce it by the end of May, which they did.

'They delivered it to me on Sunday and we've published it and brought it to the House at the earliest possible opportunity.'

Mr Hancock admitted the report has exposed inequality across the UK and that non-white people were suffering worse health and now dying of coronavirus because of their social standing.

Black, Asian and minority ethnic people have higher rates of type 2 diabetes and high blood pressure, which increase the risk of someone dying if they catch Covid-19.

They are also twice as likely as white people to live in poverty, more likely to have lower-paid jobs, and more likely to live in densely-populated areas of cities and towns which may put them at higher risk of catching the coronavirus.

Mr Hancock said of the PHE report: 'This is very timely work. People are understandably angry about injustices and as Health Secretary I feel a deep responsibility because this pandemic has exposed huge disparities in the health of our nation.

'It is very clear that some people are significantly more vulnerable to Covid-19 and this is something I'm determined to understand in full and take action to address.'

He added: 'Black lives matter, as do those of the poorest areas of our country which have worse health outcomes, and we need to make sure all of these considerations are taken into account, and action is taken to level-up the health outcomes of people across this country.

'Because there's no more important levelling-up than the levelling-up of your life expectancy and the quality of health with which you live that life.'

Shadow Health and Social Care Secretary Jonathan Ashworth said in Parliament: 'We've always known that there was a social gradient in health - the poorest and most deprived have inequality in access to health care and an inequality in health outcomes.

'What [Mr Hancock] has confirmed today is that Covid thrives on inequalities.

According to data from the Office for National Statistics, black men and women are four times more likely to suffer a coronavirus-related death than white people.

Age: Older people are more likely to die with Covid-19

PHE's report found that someone's age was the single biggest factor that made them more likely to die with Covid-19. The older someone is, the higher their risk of dying.

They were also more likely to be diagnosed because their risk of severe disease was higher, meaning they were more likely to end up in hospital and therefore get tested.

Analysing survival among confirmed coronavirus patients, the report found the risk of death was three times as high for people aged between 40 and 49 as it was for under-40s.

The report said: 'These are the largest disparities by far found in this analysis'.

People with 'underlying health conditions' have been at the heart of fears about the coronavirus and the Public Health England report shows they are at considerably higher risk of dying with the disease.

The most common condition among people who died with the virus was heart disease, which was found in almost half of patients, but this rate was comparable to its prevalence in people who die of any condition.

Diabetes, however - understood to refer to type 2 diabetes - was found in 21.1 per cent of Covid-19 victims, compared to just 14.6 per cent of people who died of any cause. This shows it increases the risk of dying of the coronavirus.

The risk was also higher for high blood pressure (hypertensive diseases), which was found in 19.6 per cent of Covid-19 victims but only 14.5 per cent of all deaths.

Dementia was also slightly higher, at 25.7 per cent from 23.8 per cent, along with kidney disease and chronic obstructive pulmonary disease (COPD).

The report added: 'Several studies, although measuring the different outcomes from Covid-19, report an increased risk of adverse outcomes in obese or morbidly obese people.'

Occupation: Men in lower-paid jobs the most at risk

The PHE report said that healthcare workers made up more than 10,000 confirmed coronavirus cases at the time it was compiled, which was likely a direct result of their jobs.

It repeated a finding from the Office for National Statistics (ONS) last month that men working in lower-paid jobs 'had significantly higher death rates from Covid-19' along with both men and women working in social care.

As examples of the men whose jobs appeared to put them at risk it said security guards, taxi drivers, chauffeurs, bus drivers, chefs, retail assistants, construction workers and factory employees were dying at higher rates.

Reasons for this are unclear but this may be because those people are more likely to come into contact with others and therefore to catch the virus, or they are likely to have poorer health if they are not well paid.

The PHE report said: 'For many occupations, however, the number of deaths is too small to draw meaningful conclusions and further analysis will be required.' 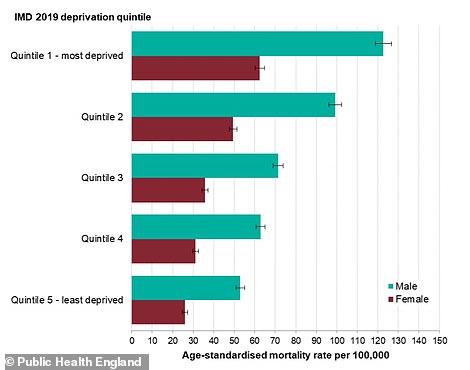 The PHE report showed that deaths were considerably higher in men in the most deprived communities, and both sexes saw a direct link between deprivation and Covid-19 death rate

People who live in the most deprived areas of the country are more likely to get seriously ill or die with the coronavirus, PHE's report confirmed.

It said: 'People who live in deprived areas have higher diagnosis rates and death rates than those living in less deprived areas.

'This is greater than the inequality seen in mortality rates in previous years, indicating greater inequality in death rates from COVID-19.

'High diagnosis rates may be due to geographic proximity to infections or a high proportion of workers in occupations that are more likely to be exposed.'

The report explained that higher diagnosis and death rates in poorer communities were still noticeable when people's age and ethnicity were taken into account, but may have been influenced by higher rates of other illnesses such as type 2 diabetes, which PHE said 'requires further investigation'.

Nick Cordero, Broadway star, dies at 41 due to COVID-19