'We are the faces of military sexual trauma and assault': Women in the Army share their own stories of sexual harassment and assault saying #IAmVanessaGuillen after remains are found during the search for the missing soldier

Women who served in the Armed Forces are sharing their harrowing stories of how they were sexually assaulted and harassed while on duty, using the hashtag #IAmVanessaGuillen.

Private First-Class Guillen, 20, has been missing for two months and was last seen at the Fort Hood Army Base in Killeen, Texas on April 22. She disappeared shortly after she told her family she was being sexually harassed by an unnamed sergeant and felt unsafe.

On Monday, a group of 30 volunteers searching for Guillen near the base discovered human remains and items believed to be linked to her.

Following her disappearance and public outcry, the 3rd Cavalry Regiment commander ordered an investigation into Guillen's allegations that she was sexually harassed at the base.

During the desperate search for Guillen, soldiers and veterans are sharing their own accounts, calling out sexual harassment in the Army. 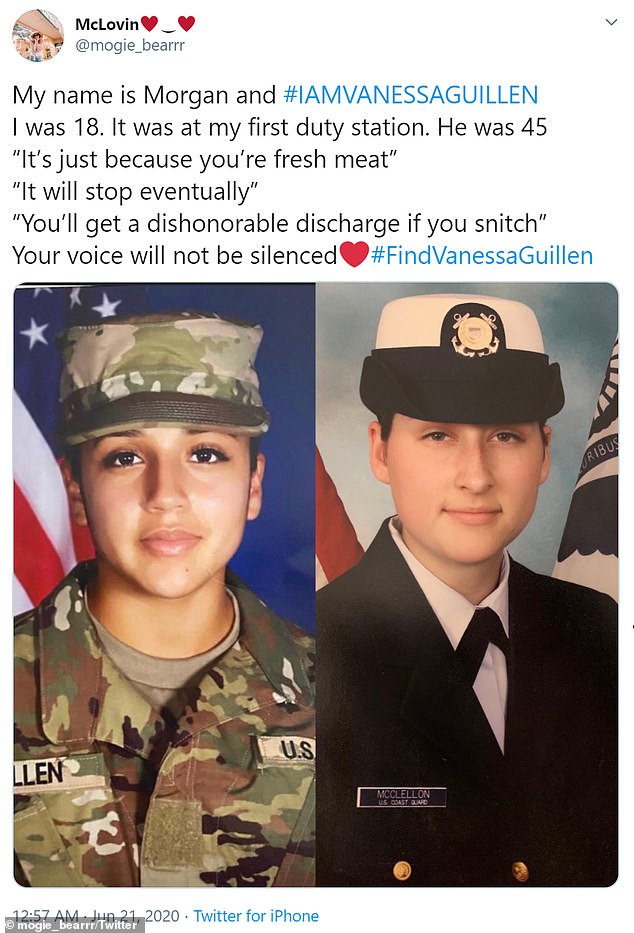 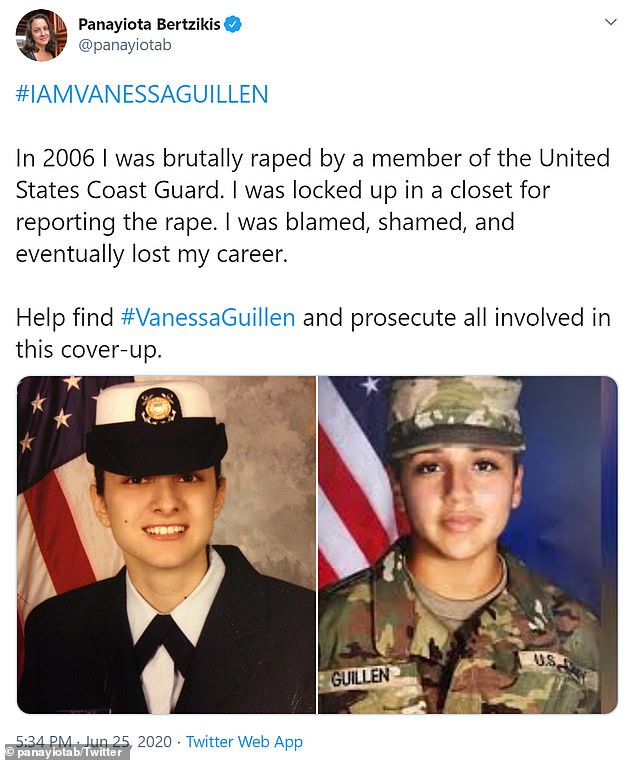 'My name is Morgan and #IAMVANESSAGUILLEN I was 18. It was at my first duty station. He was 45. "It’s just because you’re fresh meat." "It will stop eventually." "You’ll get a dishonorable discharge if you snitch," Your voice will not be silenced. #FindVanessaGuillen,' one veteran Coast Guard member shared on Twitter.

'In 2006 I was brutally raped by a member of the United States Coast Guard. I was locked up in a closet for reporting the rape. I was blamed, shamed, and eventually lost my career. Help find #VanessaGuillen and prosecute all involved in this cover-up,' another former Coast Guard member named Panayiota Bertzikis shared on Twitter.

'In my almost 4 years in the navy, I’ve been sexually assaulted 1 time and sexually harassed about 6 times... we very time I spoke up to anyone that was higher then me they helped so much. I was blessed. Not all females are.. #IAMVANESSAGUILLEN,' one woman enlisted in the Navy shared.

One veteran Navy member from Texas also spoke out, saying she was raped on duty over 30 years ago, revealing she was told she would be thrown overboardf she ever reported it.

'This is not a new thing, but it's been silenced for so long. I was raped while on a Navy ship in the middle of the ocean. If I had reported it I was told they would throw me overboard and my body would never be found. That was 30 years ago. #IAMVANESSAGUILLEN'.

A similar flurry of posts demanding change in the Army emerged on Facebook.

'Vanessa’s case feels so personal because it could have been me,' Army veteran Maira Carrier, shared on Facebook, posting her photo alongside Guillen's.

'I came in the Army when I was 17 years old. I was a victim of sexual assault and harassment as a child and I thought that the Army was my ticket out of that life, but instead I came into an even more painful world,' she explained.

She said that when she was 17 and a Private First Class in the Army she was assaulted right before starting her basic training.

'Right before getting on the bus for basic training the airport reception NCO kept me back in the airport as the others went to the training center. He took me to a corner to avoid being seen, then proceeded to hit on me and grab the inside of my leg. I said I was 17 on multiple occasions,' she revealed.

'He gave me his personal cell phone number, the reception number to contact him, his emails (work and personal), and explained to me that he could help me have fun when I get to advanced individual training. I turned all his information to my DS, who said they were going to take care of it. Later in my career I looked up this individual and he had been promoted twice. It was as if my complaint made no impact in his career,' she added.

Another soldier, Jasmine Maylott, who had been stationed at Fort Hood also exposed the sexual harassment she suffered at the base in June 2019 on social media.

'Commands just sweep it under the rug. I have seen it with my own eyes. Enough is enough. I believe in Vanessa, and know how it feels to not be believed,' she shared.

She said when her friends encouraged her to report it, she was 'relentlessly bullied'.

'I was a target for so much hate and cruel words. They made life harder on deployment for me,' she said.

Another soldier named Nikki Williams who had been stationed at the Malmstrom Air Force Base in Montana revealed she suffered sexual assault at the hands of leaders at the base.

'As long as I said nothing, stayed in my place and allowed those who out ranked me to take full advantage of their rank and position, I was fine. The moment I spoke out and began to seek help from legal, I was bombarded and inundated with letters of counseling, letters of reprimand, and was painted out to be the troubled young airman that simply refused to conform to the "Air Force way,"' the soldier said.

'I managed to make it through my enlistment, but it wasn't without mental breakdowns, counseling sessions, medications, losing my hair, plenty of tears, and leaning on the friends that kept me close to what one could consider sane.

'This culture needs to change among our military. #JusticeForVanessa #IAmVanessaGuillen,' she added.

'The military sucks for women. Chances are you WILL be harassed, you WILL be assaulted, and most likely your command won’t really care. They’ll sweep it under the rug, they’ll make you face your assailant every day as if nothing was wrong,' Marie said.

'Your tires might be slashed because they know where you live and work, you might see them come into your work center JUST BECAUSE they know it triggers you and they get a kick out of it,' she added.

'We are the faces of military sexual trauma and assault. It needs to be acknowledged. You will be found and you WILL have justice served. We have your back and we will never leave you behind,' she said.

The powerful hashtag encouraged a string of women to come forward, breaking a taboo of speaking out, not so different from the #MeToo wave in 2017 that kicked off a worldwide reckoning for sexual assault and harassment.

According to a fact sheet organized by Protect Our Defenders, a non profit that works for military sexual assault and harassment survivors, in the fiscal year of 2018 a total of 20,500 service members were sexually assaulted or raped, as per Task and Purpose.

And more than 75 percent of those victims did not report a crime at the time.

A third said they didn’t report the abuse out of fear that they’d be ignored or that the process would not be fair.

Less than half of the harassed or assaulted women said they 'felt well supported by their chain of command'.

On Monday volunteer group Texas EquuSearch came across the remains in an undisclosed area in Coryell County.

The discovery was not too far from the site where the remains of missing soldier Gregory Wedel-Morales were found on June 19. He went missing in August 2019.

Sullivan: China to Face 'International Isolation' if It Does Not 'Cooperate' on COVID Origin Probe

Juneteenth Isn't Just a Celebration of the End of Slavery. We Also Honor the Black Americans Who Helped Create Their Own Freedom

One dead after a driver crashed into Florida Pride Parade

A video of live bats in cages at the infamous Wuhan Institute of Virology surfaces, adding more weight to the 'lab leak' theory

COVID-19 probe should shift to the US, says China's Disease Expert