Philips, married to his third cousin, was the longest-serving consort to the British Ruler. Queen Elizabeth is currently the Queen of 15 counties including the United Kingdom.

Philips would have reached his 100 years, had he survived till the 10th of July. He passed away 12 days before the Queen's 95th birthday on the twenty-first of April.

He had been hospitalized in February and was treated for an infection and a preexisting heart condition, Buckingham Palace said. He was released a month later after undergoing a heart procedure.

“We mourn today with Her Majesty The Queen, we offer our condolences to her and to all her family, and we give thanks, as a nation and a Kingdom, for the extraordinary life and work of Prince Philip, Duke of Edinburgh,” Prime minister Johson said. 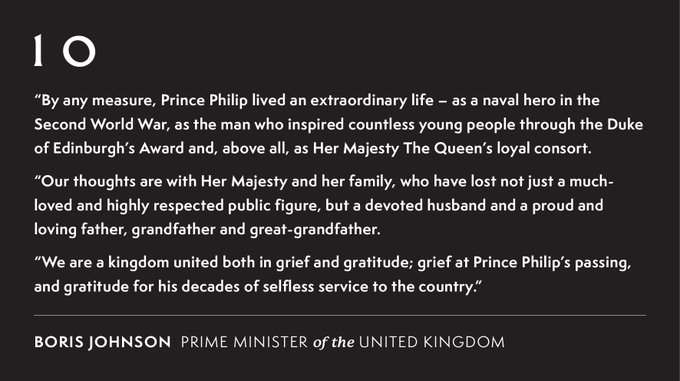 Elon Musk to back off of Bitcoin trading in Tesla

"Get these nuts off the streets", Manhattan Man Writes To Mayor de Blasio

"I think it's very critical that we proceed carefully": Boris Johnson

Boris Johnson confirms Coronavirus lockdown to be eased in England

A second independence referendum is a "matter of when – not if": Nicola Sturgeon

Elon Musk to back off of Bitcoin trading in Tesla

"Get these nuts off the streets", Manhattan Man Writes To Mayor de Blasio

The operator of "Raper Association" resurfaces on Facebook to abuse and harass women, again

Rocket debris predicted to fall on the North Island

Family of Kamala Harris in India struggles with the Coronavirus