'A mask is not a symbol': These restaurants had seen too many disrespectful customers. They closed rather than serve them

It's a hashtag on social media that a Mexican restaurant in Los Angeles used to announce Sunday that it was temporarily closing its two taco stands because some customers had refused to wear face masks amid a surge in coronavirus cases in California.

It's not the only restaurant that has experienced similar incidents and, therefore, decided to shut down at some capacity.

As coronavirus cases have continued to multiply in the U.S., 17 states have paused their reopening plans. Several states – like California, Oregon and Kansas – have mandated face masks in public spaces, joining 17 other states, according to Masks4All, an all-volunteer organization that advocates for mask wearing.

The Centers for Disease Control and Prevention also recommends wearing "cloth facial coverings" to help prevent the spread of coronavirus. 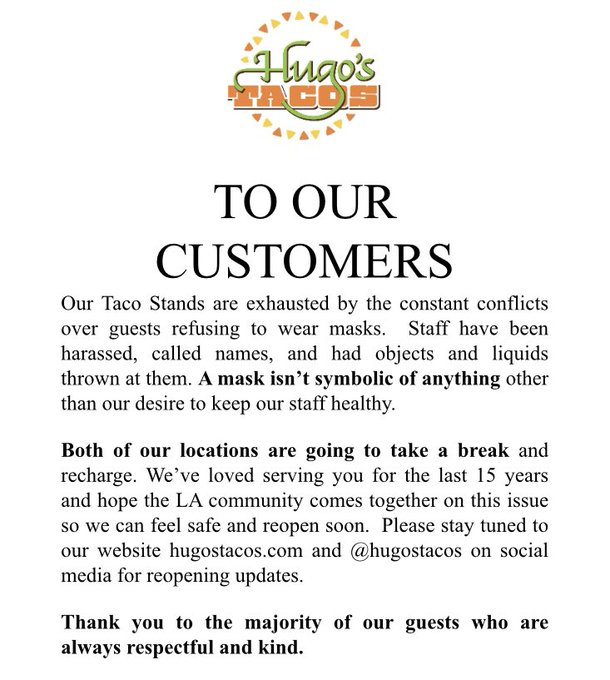 To Hugo's Tacos co-owner Bill Kohne, face masks "aren't a choice.This isn't a company policy, this isn't a belief of mine or anybody else that masks are good. It's part of public health code," he told USA TODAY on Tuesday.

And #NoMaskNoTaco is more than just a hashtag, Kohne said. It represents an issue,  and a symbol of political beliefs for others, that some people have with wearing facial coverings, he said.

Mapping coronavirus:Tracking the US outbreak

As word of Hugo's Taco's closure spread in the media, Kohne said people across the country began to ask how they could help the restaurant's employees.

That's why Kohne created a GoFundMe fundraiser, where nearly $42,000 had been raised as of Tuesday night. The money will be evenly distributed for employees at both taco stands, he said.

There's a similar story at Mexican Fiesta in Dearborn Heights, Michigan, west of Detroit, which stopped dine-in services on Monday. The restaurant will only offer carry-out.

"Unfortunately, there were multiple situations where our staff was disrespected and treated rudely," the restaurant announced in a Facebook post Sunday. "The safety of our customers and staff is our number one priority so we have made the tough decision of closing our doors to the general public until further notice.

Sam Alvarado, manager of the family-owned and operated restaurant, told the Detroit Free Press of the USA TODAY Network that most of the customers "have been amazing."

On Saturday, Alvarado said that a third-party delivery driver got physical with him when he was told to wear a mask.

"It's really difficult to do just what we are doing as it is and trying to keep everybody safe," Alvarado said.

In Pocahontas, Arkansas, Taco Casa closed its dining room for the same reason.

"So many people [were] harassing the waitresses, saying things that were not kind,” Doris Halcomb, co-owner of Taco Casa, told TV station KAIT8.

“I don’t feel like my waitresses, or anybody that’s working for me, deserves that. We try to protect the customer by wearing masks and gloves, and they don’t want to respect us.”

In Los Angeles, Kohne said he hopes such incidents will create conversations about the importance of masks during the ongoing pandemic.

"A mask is not a symbol," he said. "It's just a device that is going to help protect your community and your neighbors from the spread of a virus."

Lebanese PM and his cabinet RESIGN over explosion that killed 160

A record number of people are giving up their US citizenship, according to new research. Here's why

1 dead and 6 injured of gas explosion in Baltimore

Lebanese PM and his cabinet RESIGN over explosion that killed 160

A record number of people are giving up their US citizenship, according to new research. Here's why